The Tennessee General Assembly is due to temporarily adjourn this weekend because of Covid-19.   While that may mean legislation to force colleges and universities to allow students 21+ to carry on campus is on hold – we ask constituents to continue contacting their lawmakers in opposition to this dangerous policy.

HB 2201/SB 2288 would allow students (ages 21 +)* to carry loaded, concealed handguns on many parts of Tennessee’s public colleges and universities.  We need your help today to stop this legislation. 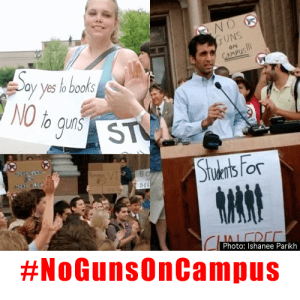 Please take a moment and with one click you can email the members of the House Constitutional Protections & Sentencing Subcommittee and Senate Education Committee.

This is a public safety issue. Tennessee’s campuses have extremely low crime rates. Studies have regularly shown that the presence of firearms increases the risk of suicide and unintentional deaths.

Thanks for taking action.

*In 2016, TN enacted legislation to allow full-time college and university employees in possession of a concealed weapons permit the ability to carry on campus in limited places after registering with campus law enforcement.